My parents excitedly told me about Harry’s in Bridgend, County Donegal, before Christmas. This place had fresh Donegal fish. They had locally sourced produce and reasonable prices. I was keen.
We made a trip in that deliciously frustrating lull after Christmas when you’re bored, stuffed full of cranberry sauce and on the constant verge of a row, or having one, with a loved one. Awkward meals and box set escapism.

Fish was a good compromise.

We set out with lunch on our mind to Bridgend. It is over an hour’s drive from my home in North West Donegal, towards Greencastle and Derry. Starving and cranky, we were welcomed by Donal Doherty who runs it with Kevin. The chef at the helm of the humming open kitchen is Raymond Moran. Friendly smiles and presentation of wine lists resulted in a long exhale.

And then the menu. It sang out like a love letter to Donegal’s coast, and landscape. It was mindful and rejoicing in the ingredients that were to be availed of, and the bounty of fruits and vegetables and meats and fish that are local. They just need to be sought out. Things like ‘Donegal sirloin,’ beef and lamb from ‘Edenmore farm,’ Glebe Brethan cheese, ‘Inch Island Mallard Breast’ and ‘fresh fish landing from Greencastle’ were smilemakers.

Local fish, in a local restaurant. Local, local, local. And they were championing my kind of ‘bridesmaid’ fish like gurnard and pollock, which was a joy to see.

Between the four us we devoured dishes like the crispy chilli local squid, which was chew free and with a good smack of chilli. And by no means ‘wee,’ it was a proper Donegal portion. The gurnard was soft and fresh and cooked with respect and a simple tasty chorizo sauce . A special of Beef bourgignon had some properly tender beef and a gloopy, buttery, saucy gravy that begged to have bread or a spoon to finish it off. And we did. The beer battered Ling with mushy peas and real tartar sauce was another bridesmaid that should have been the bride. They were good chips and mushy peas that impressed my father. Apple crumble and custard was a comforting ending with tender and tart apples and a biscuity crumble.

They now have a walled garden nearby with gardener Dermot Carey ensuring what’s fresh and ripe goes on the menu. This is a team passionate about showing what Donegal can grow and produce. And on the service, which is utterly core to this experience, the staff were well trained and happy people.

Contentment was contagious. We left full in our tummys and without a voice raised over the last After Eight in the box that evening. 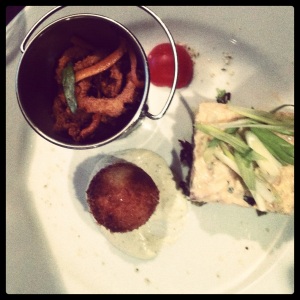 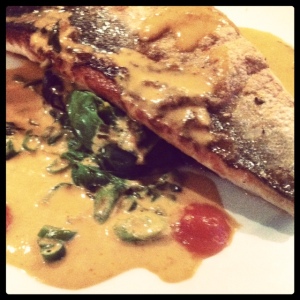