I was recently reminded of how lucky I was to get to dine  in elBulli restaurant.

Although it was over three years ago, I can still taste every dish.

It was one of the most spectacular nights of my life.

Here are some words I wrote about it shortly after returning:

Some people are so determined to eat in Spain’s elBulli restaurant that they’ll book a table four years in advance – like a chap I met last year who planned a table for his wife’s 40th birthday. Others, like me, create 11 new email addresses and enter the annual lottery for reservations. Since there are around 400 applicants for each available cover, we usually don’t hear anything back.

But there’s always the chance of a Christmas miracle. In late December 2008, my friend Ciarán called me, breathless. “Guess where we’re going next October 17th?” I had bullied (pardon) him into entering the lottery too; if either of us got in, we would take the other person.

elBulli is housed in a plain, unassuming stone building on what seems like the edge of the world, about two hours north of Barcelona outside the Spanish seaside town of Roses. British magazine ‘Restauran’ named it the best restaurant in the world a record five times, most recently in 2009; it holds the highest Michelin rating of three stars; chef-owner Ferran Adrià was the subject of a case study by Harvard University, investigating artistic creativity. So almost a year after getting our table, we were feeling a little pressure and even more expectation on the long, winding trip up the hill.

Ironically, elBulli operates at a loss, although Adrià’s other ventures – books, kitchenwear, a hotel and fast-food outlets – do make money. It opens just from June to December; the rest of the year, the chefs research, experiment and travel for inspiration. Only about dozen of the kitchen staff are paid at elBulli – the rest work for free, for experience.

On entering, we were warmly greeted by a troupe of staff and the maitre’d asked if we’d like to see the kitchen. Oh I think so. It was like seeing the Oompa-Loompas – only better looking – diligently working on each tiny dish. Scientific, harmonious, silent. It was gorgeous. I giggled like a schoolgirl on meeting Ferran himself. Overwhelmed and speechless.

Dragged back out, we took our seats in the admirably unponcey dining room, full of comfy chairs and whitewashed walls; little French bulldogs and prints from Dali’s back catalogue shone out from a cabinet.

We knew this wasn’t going to be an ordinary meal. It would be a lesson in creative cooking, mathematics and chemistry. It would play with our concepts of what it means to eat. We weren’t given a menu; we salivated at what might lie ahead.

There were more than 30 courses, kind of in order: baby starters, slightly bigger dishes and sweet things. Most were on spoons or eaten with our fingers – there were no knives, just spoons or forks. And no dilly-dallying. The thought of 38 courses might seem overwhelming, but most were as light as air and carb-free, so we didn’t feel too full.

I’m in danger now of lapsing into superlatives and pretentiousness. To try and decipher meaning from the menu is pointless; some of the combinations sound bonkers, and they were.

In fact, when I was handed an oyster leaf with dots of balsamic vinegar, I became convinced that the whole whole thing was going over my head. But Ferran always drew us back in with a cracking next course, like the pleas of a long-lost lover to return to their warm embrace. Eel with rhubarb, custard foam, sherry cream and capers.

Parmesan ravioli, sounded deceptively simple,  but it was utterly brilliant. We were instructed to take two in our mouths and let them dissolve, then take the silver leaf balsamic, followed by a sip of concentrated basil water and then another ravioli. Magic.

It’s still difficult to put into words how elBulli was and is remembered. It was an experience in disarming theatre, the sublime and ridiculous in one evening.

On the drive home, we were delirious. Not crying, though we felt like it; speaking gibberish despite being sober. After almost missing the flight home, it was only when we got to Dublin Airport that we ate our first post-elBulli meal. From a fast-food stall. But please don’t judge – we wanted to feel a smack of reality, and knew that no matter what we ate, it could never come close to that little evening on the Costa Brava. 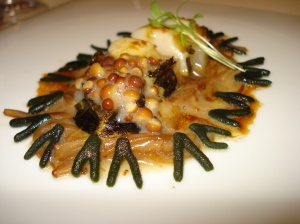 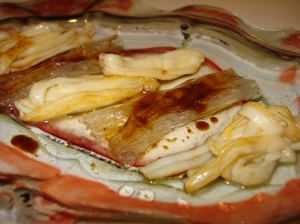