This article was originally published in The Irish Times. 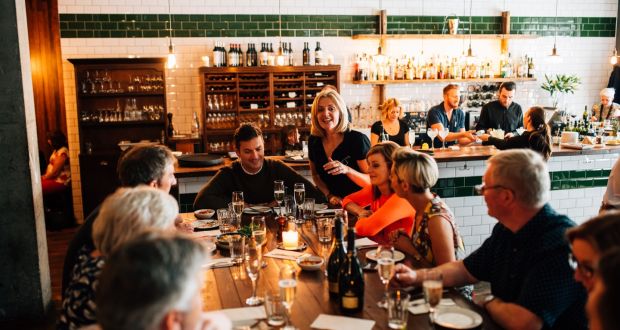 Imagine a meal that begins with the snap of crusty sourdough spread generously with Co Down’s golden Abernethy butter. Then move on to a plate of just-out-of-the-water Carlingford oysters, before a main of Mourne mountain lamb with buttery local potatoes. Round it off with a chocolate and salted caramel ice-cream from Glastry Farm from the Ards Peninsula or, for cheese lovers, Northern Ireland’s only raw milk blue cheese, Young Buck. This is just a tiny example of the endless bounty of Northern Ireland’s food produce you will find on menus these days in Belfast. Its restaurant scene has never shone brighter, making it the perfect time to visit.

The past decade has seen the growth of the relationship between Northern Ireland’s producers, suppliers and restaurants. As the political situation stabilised, Belfast saw a surge in tourism with visitors taking in tourist attractions such as the Titanic visitor centre or stopping off in the city before a trip to the Giant’s Causeway or the Game of Thrones filming locations along the north coast. Hotels and restaurants are in demand, and restaurants and food producers have harnessed this opportunity to show off their local produce to these new visitors.

“I think anybody who comes to Belfast who hasn’t been here before will be surprised at the level of food, service and hospitality that Belfast delivers,” says chef Andy Rea. In partnership with Bob and Joanne McCoubrey, chef Andy Rea has established Mourne Seafood Bar as a Belfast institution. Rea cut his teeth in catering at the Belfast Institute before going to work in the US. He returned and was appointed head chef at Paul Rankin’s Michelin star restaurant Roscoff and later, his other eatery, Cayenne.

“In my mind, what I wanted [with Mourne Seafood Bar] was to create a restaurant where, if you closed your eyes and ate the food, you were eating one star Michelin food, but it might not look like it. It was very rustic.”

Rea’s philosophy is to use the best of what’s fresh and what has landed. “We keep everything as local as we possibly can, weather permitting,” he says. “Tourists come to us because they want to know that the lobsters are local, where the mussels are from, if we are using oysters from Donegal or Carlingford; they want to know the story.”

Michele Shirlow, chief executive of Food NI – an organisation with some 450 members, dedicated to enhancing the reputation of food and drink from Northern Ireland – says the Troubles and political uncertainty did impact on tourism and the food scene.

“Northern Ireland has always been a large food-producing region but because of the political unrest you couldn’t really brand Northern Ireland as a food region. Therefore, it’s only in the past five years that we have had ice-cream makers, cider makers, charcuterie makers, gin makers all appear from the woodwork,” she says. “I think also there is new-found confidence here and people are happy to be themselves as opposed to trying to pretend to be French or Spanish cuisine.”

Caroline Wilson is founder of Belfast Food Tours, and founding director of Taste & Tour NI. A former solicitor, Wilson turned her hobby into a business and founded the award-winning food tours, based entirely on local produce, in March 2014.

“I was always really into finding out about local produce. I remember chatting to Alison Abernethy [Alison and Will Abernethy make traditionally churned, multi award-winning butter in Co Down] in the early days and she was telling me something along the lines that she was dairy intolerant and I thought, ‘You’re a dairy intolerant butter maker? One of the best in the world, and you are dairy intolerant?’ There were stories behind the people so it was more about me telling that story rather than just going, ‘Here’s some really nice butter.’ I wanted people to know what local food was rather than an Irish stew or an Ulster fry.

“The tours are telling a very positive story in Belfast of Northern Ireland food and drink. I think it’s also learning about the people who follow their passions and who are trying to make this place unique for its food and drink,” she says.

“We had not very much to be proud about here for such a long time and I think food and drink is something we can really hang our hats on. We’re really good at showing people a good time because we are so delighted that people come here. We don’t have tourist fatigue.”

It was during some “accidental market research” while he worked in the renowned fine food delicatessen, Arcadia on the Lisburn Road, that Mike Thomson began hatching a plan to make local cheese.

“Everyone was always asking for local cheese and you’d either give them something from down south or from England. There was no one making small scale cheese in Northern Ireland. I thought I’d go away, learn about it, and see if one day I could live out my dream,” he says.

He went to study cheese making at the School of Artisan Food near Sheffield before honing his craft with some of the finest British artisan cheese makers, eventually becoming head cheese maker at Sparkenhoe farm.

He returned to Northern Ireland and used crowdfunding platform Seedrs to get his business off the ground. He started operating out of Newtownards making Northern Ireland’s first raw milk cheese called Young Buck and, in 2014, he had sold his first cheese to his former employer Arcadia.

Thomson says one of his joys working in Northern Ireland, as well as making the cheese, is the small amount of food miles taken to create it. “We make the cheese eight miles away, we drive two miles to collect the milk, we hardly do anything to it and it becomes cheese. I think the simplicity of that is just pure love.”

There are two Michelin star restaurants in Belfast, one is EIPIC where Alex Greene is head chef. It is owned by Michael Deane, renowned chef and owner of dining spots throughout Belfast. The other Michelin starred restaurant is Ox, whose head chef Stephen Toman believes there’s “a new breath of fresh air in the Belfast food scene”.

“It is a small community in Northern Ireland. It’s a close network so nobody wants to be left out because their stuff isn’t as good as the other person; be it cream or butter or meat or fish, everyone wants to get their produce on restaurant menus and selected by chefs. That reflects then into the restaurants themselves.”

One of the most enjoyable aspects of a trip to Belfast is the city’s hospitality. It is perhaps unexpectedly warm, polite and charming, with a wry, local wit from taxi drivers to train inspectors to waiters.

“If Belfast people see anybody who looks bewildered or lost, they’re over trying to help them out. The people are natural, they have that bit of craic and banter,” says Rea.

Ask the locals: where are your favourite food and drink spots in Belfast?

“You have got to go to Saint George’s market, it is the historical hub of Belfast food with food from all over Northern Ireland. Ox, to me, has got to be one of the best food experiences you can have in Belfast. The Muddlers Club and Mourne Seafood Bar are great in the city centre. In east Belfast, Il Pirata is a kind of home from home. Our Cathedral Quarter is definitely the place to go for a drink; places like The Spaniard. You can have incredible cocktails in The Merchant Hotel and Bert’s.”

For breakfast it would be General Merchants where my favourite is sourdough, avocado, Vegemite and bacon on the side. For dinner in the city I love Coppi in St Anne’s Square and its sister restaurant, Buba. There is fantastic coffee in Root and Branch, who roast their own coffee. I love Kelly’s Cellars for a pint.”

“I love Bistro Este and The Curated Kitchen, where the menu is from cookbooks and changes every week. Established Coffee and Buba are great. A friend of mine has a couple of brilliant coffee shops called Root and Branch. I love Laverys for a pint. They also run Woodworkers which is great for local craft beers and they feature our cheese, so it is great for a platter.”

“You can’t go wrong with Deane’s or James Street South or Ox. I like The Muddler’s Club as well. All around St Anne’s Square is fantastic with places like Coppi. I also like Graze in east Belfast. I think the thing about Belfast is that the standard is really high and even if you just go to a coffee shop you do get good grub.”

“I love Howard Street and The Muddler’s Club in the city if I was going out for dinner. For breakfast, General Merchants on the Ormeau Road is great. I also go to Graze in east Belfast. There is always a buzzy atmosphere in the Cathedral Quarter so pubs like The Duke of York, The Thirsty Goat and The Dirty Onion are fantastic.”